By Jennifer Kurz in Climate & Energy

“How do the scientists know climate change is happening?”

I have heard the question posed a number of different times from a number of different people: the weather changes all the time, why do more than 97% of scientists think the climate is changing? The National Climate Assessment Report, released recently by the White House, provides one of the most understandable answers to this question I have seen so I’m going to call attention to it here.

As the report says, “Evidence for climate change abounds, from the top of the atmosphere to the depths of the oceans.”  What is that evidence exactly? The report includes a handy infographic (here’s more on why we like these) that summarizes just 10 of the trends scientists see from their meticulous collection of data “using satellites and networks of weather balloons, thermometers, buoys, and other observing systems.” 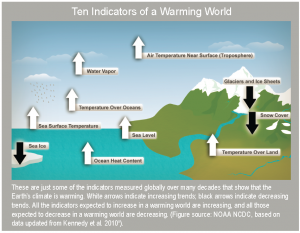 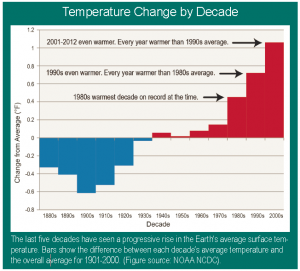 “Even if it is changing, is the change caused by people?”

So the next question I get is, are scientists sure climate change is caused by people? And again, the report couldn’t be more definitive: “Multiple lines of independent evidence confirm that hu­man activities are the primary cause of the global warm­ing of the past 50 years.” These include:

The report goes on to describe many of climate change’s impacts by region of the U.S., some of which are occurring today. These are worth looking up on the report’s visitor-friendly website.

Congratulations to John Holdren, the White House’s Science Advisor (and one of my professors at the Harvard Kennedy School), and the team of over 300 experts involved in producing a report on climate change that everyone can understand!